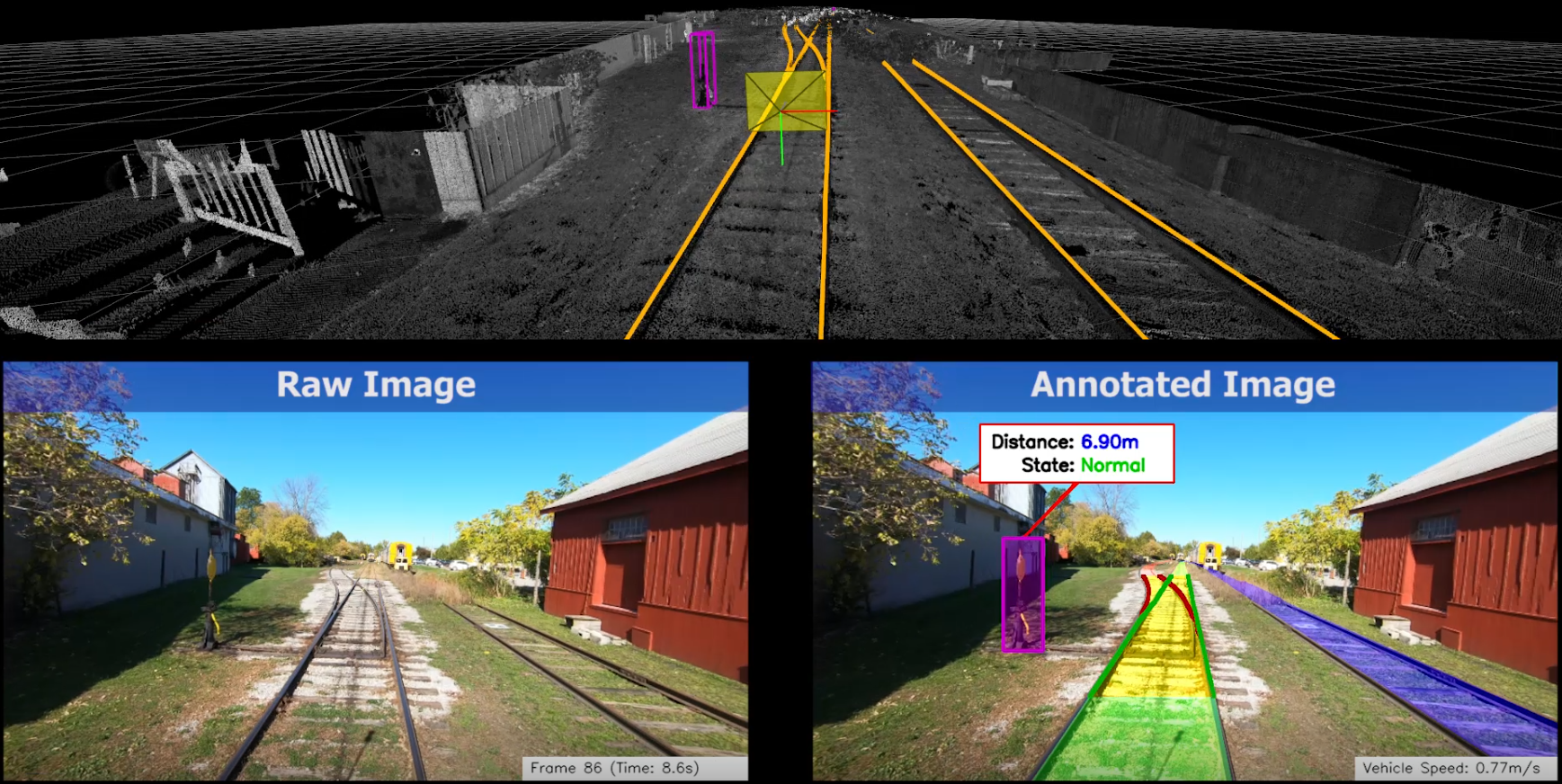 This article was published in YFile – York University’s News ( http://yfile.news.yorku.ca/2019/11/29/york-u-researchers-play-major-role-in-advancing-autonomous-rail-travel/ )

It is no secret that technology is disrupting many industries – from healthcare to customer service and everything in between. Rail transport is no stranger to these innovations and is currently undergoing a rapid digital and autonomy revolution.

In tandem with the development and evolution of the autonomous economy and smart, sustainable, interconnected cities, passengers can expect the future of rail travel to be faster, cheaper and operated autonomously.

Professor Gunho Sohn from the Department of Earth and Space Science and Engineering in the Lassonde School of Engineering at York University is playing a major role in leading this change, through a cutting-edge autonomous train research project known as the Ontario Train Autonomy Collaboration (OnTRAC).

The $2.6M project will be funded over the course of two years (April 2019 to March 2021) and is supported by the Autonomous Vehicle Innovation Network – AV R&D Partnership Fund – Stream 2, which is administrated by Ontario Centres of Excellence (OCE).

The project aims to address various deficiencies in current autonomous rail control and signaling technology, such as Thales’s SelTrac Communications Based Train Control (CBTC). SelTrac is a digital railway signaling technology used to automatically control the movement of train for driverless transit systems (GoA4 – Grade of Automation Level 4). The prototype Obstacle Detection, Classification and Tracking System (ODCT) developed under the OnTRAC project will allow for reliable, safe and autonomous recovery from degraded vehicle scenarios that could happen if there is a failure in the SelTrac technology.

Current driverless transit systems transport millions of riders each day worldwide, operating at the highest levels­­­­­­­ of safety and reliability while simultaneously operating the automatic routing of trains for maintenance, emergencies and scheduled interruptions.

This is achieved even though current onboard control systems put in place rely entirely on centralized control outside the trains to ensure safety and prevent collisions.

Although infrequent, unexpected local safety hazards do occur, such as vehicle communication failures or positioning outages, which require operator intervention to move the vehicle to the next available safe stopping point or station.

During such “restricted manual (RM)” operations, there is an increased probability of vehicle-vehicle collisions. It is also typically the case that an operator is not on the vehicle when the vehicle becomes degraded and applies the emergency brake. An operator must then locate the stopped vehicle, board the vehicle and drive to the nearest safe stopping point to allow passengers to disembark.

The goal of this project thus, is to develop an AI-based computer vision system to completely replace the SelTrac CBTC-based train control system so that if a vehicle becomes degraded, human intervention is not needed.

The key difference between an automatic train and an autonomous train lies in the latter’s ability to sense its local surroundings and gather its own information to make intelligent behavioral decisions in response. This self-governing capability is the key to achieving the Levels of Autonomy as defined for rail systems.

The sensor positions on the train

The interpretation of the data provided by the multiple sensors – LiDAR, radar, visual and infrared cameras and ultra-wide-band radio, is the responsibility of the software and algorithms developed by the partnership. To transform raw sensor data (such as the camera pixel intensities returned from a staff member on the tracks) into the corresponding scene “metadata” (the detection of a person on the tracks) is the job of the perception algorithms; to fuse raw and metadata, track through time, and produce higher level metadata, is the job of the data fusion algorithms.

AI-based perception algorithms developed will then be integrated with Thales’s OnTRAC platform including tracking pipeline developed by TrackGen and Neptec’s LiDAR sensor.

Prior to the OnTRAC project, Sohn’s research lab has developed a cutting-edge computer vision system for automatically detecting and modeling rail tracks and their multi-scale attributes using mobile LiDAR sensors in collaboration with Thales Canada.

The OnTRAC project is an extension of successful research collaborations between Thales Canada and York University. Autonomous rail has the potential to reduce the reliance on – and improve the efficiency of – more traditional transportation solutions, ultimately reducing road congestion, decreasing waste and the overall environmental footprint.

“This project directly supports the government’s objectives for reducing environmental damage and greenhouse gases, while also increasing safety and efficiencies of transit systems, smart cities and related industrial and automotive systems. A key benefit from the introduction of unmonitored systems like autonomous rail is the projected improvements in safety, service efficiency and productivity,” says Sohn.

To learn more, visit the project website for the latest updates.